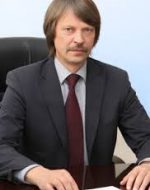 Deputy Minister, Head of Rosnedra
Ministry of Natural Resources and Ecology of the Russian Federation

Evgeny Arkadevich Kiselev was born on 5 September 1961 in the city of Belgorod.

In 1983 he graduated from the Sverdlovsk Mining Institute named after V.V. Vakhrushev (Ekaterinburg).

From 1983 to 1985 he worked as an engineer and geologist at the Ural Geological Survey Expedition of the Ministry of Geology of the RSFSR.

From 1985 to 2000 he went from a senior geologist of a geological survey party to the head of the FSUE “Gorno-Altai search and survey expedition”, he headed the expedition for 10 years.

From 2000 to 2012 he held the position of Deputy General Director for Geological Exploration of the All-Russian Geological Institute named after Karpinsky (St. Petersburg).

Since 2012, he served as Deputy Head of the Federal subsoil use agency (Rosnedra).

On 9 September 2015 he was appointed as acting head of Rosnedra.